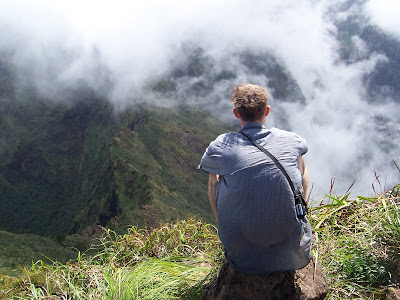 I woke up at sunrise on the bangka because they use loud music to get the crew up and going. We were supposed to leave around 8am, but didn't push off until almost noon. While we were waiting, passengers slowly filled the small crawl space where I had spent the night. The night before I was told there was an American couple that would be boarding in the morning. Morning came around, and the bright white couple in their 40s turned out to be two Belgian airline operators on vacation. They were on their fifth day of dizzying travel coming from Belgium and had to spend an entire day getting to Sibuyan. They'd been all over the world over the years and the Philippines is the only place they return to again and again. They'd spent one week at a time visiting the highly advertised Borocay beach, and were ready for a different experience. This time they were headed to Sibuyan for a month. Sibuyan is one of the most remote and least travelled places in the Philippines. I hope they had a good time.

While we were waiting I practiced "Sore in the Morning" and composed the frame of a song about clock-time vs nature-time, and about dreams, in which I am usually flying. It matches the pace of rocking waves, but the time signature is mostly 5/8 and the melody overlays a 4-beat pulse over the time signature, serving as an active challenge to regimented "time" in all its forms. It lands nicely into a calm waltz the way an airplane feels when it has landed and the wings have stopped lurching and the air brakes are returned to their respective homes. Still working on the lyrics though... Waiting for a good 4-hour block to commit to it. People ate breakfast while they waited, and almost every single passenger through plastic bags, wrappers, and styrofoam containers over the side. At first I fished them out, stored them in my own trash bag, and then frustratedly scolded them for contributing to the Pacific Garbage Patches. But when I realized every person on the boat was doing the same I gave up. 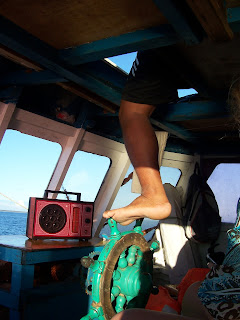 The boat trip was 7 hours long (3hrs longer than it was supposed to take). The engine of this particular bangka sits right underneath the main passenger compartment with the exhaust pipe acting as the support awkwardly penetrating up from the floor and through the ceiling in the very center of the compartment. The engine was so loud I couldn't understand the person next to me even when they shouted. It got hot in that space, and the pipe leaked exhaust so that when the tarps were pulled down to protect people from rogue waves they were simultaneously fumigated with exhaust. I couldn't stand the sound so I went aloft to the roof where I spent the ride napping, practicing guitar, and munching on pomelo. I didn't realize until later that I was sitting over the bridge of the bangka, and the man I was sitting next to had his legs in the hole below us because he was steering. I thought I had seen all of the things Filipinos do with their toes (that's the only Filipino genetic trait I seem to have inherited myself) but steering a passenger boat wasn't the list I had formulated in my mind.

Once we arrived, I haggled till I found a cheap tricycle driver to take me and a few other people to Cajidiocan. I found the port, hid my things in the dark, and found some food. The produce was comparatively very expensive because most of it was imported from other Islands. The people are so nice though. Good English because many moved there from other islands, and very welcoming. After I found the fruits I was looking for, I returned to my thingsat the port, which was secluded and completely deserted except for two officers who I knew were sleeping in the office but who wouldn't answer my calls at the door. So I laid out my pad on a bench and went to sleep.

Sometime in the middle of the night, I was woken by a group of men also looking for a dark place. I heard their conversation change when they saw me, I didn't move, and they moved along. Thirty minutes later one person returned, and I saw as they used their phone to see what I was. Moments later, I heard them rustling with the handle of my guitar. I sat up quickly and they took off running. Pissed and only a little unsettled, I moved closer to the front door of the office in a harder to see place, went back to sleep confident enough in my ability to wake up if I heard footsteps. I decided then and there that I was going to make sure to sleep inside Barangay captain offices, inside ports with other people, or in the home of a local from then on. 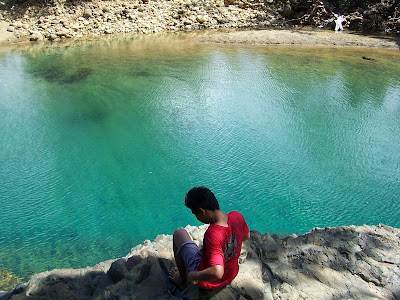 There are only three jeeps on the entire island of Sibuyan, and they leave from Cajidiocan at 6:30, 7:30, and 8:30 in the morning. I caught the middle one after I had picked up some local vegetables and was dropped off at the dirt road to Mt Guiting-Guiting Natural Park, where I walked 1km to the Visitor's Center. I was warmly and slowly welcomed by the caretaker and friends, and arranged a guide to climb the mountain in the morning. Then I spent the rest of the day relaxing. One 15-year-old boy took to me and wanted to take me to a swimming hole when I mentioned swimming. Fifteen minutes' walk later, we arrived at the confluence of three streams, and a pool that was so beautiful it could only have been crafted by nature. It was the perfect depth and temperature, and it was so clean I was drinking as I swam. 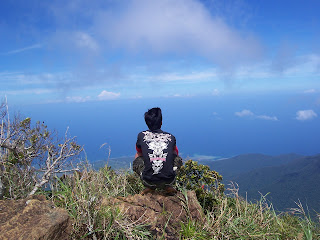 In the morning, I received more and more contrasting information about the hike up the mountain. Some say one day up and down is possible, others say 3 days minimum, some say easy, others say hard. My guide arrived late. Electricity is so sparse on the island of Sibuyan that most everyone lives by the sun, and almost no one has heard or particularly likes much music. The superintendent met me in the morning, and after only fifteen minutes' conversation, liked me enough to charge the local price for guide and entrance fee (easily one-third of the price for foreigners). 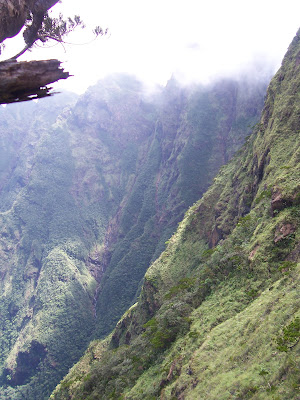 My guide was 20 years old, had only climbed the mountain 3 times before, and was grossly unprepared. But he was nice and eager to prove himself. He wore sinelas (flip-flops), had a shoulder bag with cooked rice, three cans of fish, and a rain jacket. Twice on the way up he went up the wrong path, came down and decided we should go up the other path. It was a 5-hour trek up to the top of Mayo's Peak. As the hike went on, I realized that Mayo's Peak was the gateway to Guiting-Guiting, possibly the hardest climb in the Philippines. It takes only 5 hours to reach the top and the last camp spot on the mountain. It's 7 hours' hike from there to the summit of Guiting-Guiting, a very difficult trail that begins by following a ridge 6' wide or less, hopping boulders with sheer cliffs on either side. Then it's a full day back down. If I had proper information and one more day to spare I would have done it, but I didn't have enough food (expecting only one day up to the top and back down, two at the most). I was on a time table because I had a scheduled meeting in Manila with Haribon Foundation on Friday, and there are only two ferries a week from the Romblon Islands (of which Sibuyan is one). I had to catch the next one or forfeit my meeting in Manila. Nevertheless, it was a beautiful hike with plenty of steep sections, and the view from the top was stunning. It usually takes people eleven or twelve hours to go up and come back down, if they make it in one day. It took me eight hours total, with a half-hour break at the top to admire the view.

I got back, led my guide to the swimming hole from the day before, and packed up for the next day. Then I was invited to dinner (laced with fish), after which there was drinking of gin and tons of tunes from Josephine. My friends tried their luck at catching crawfish in the creeks surrounding the property (easier at night because their eyes reflect flashlights). I slept long and deep and woke up in time to catch the morning jeep to the port in Ambulon. I took the 4-hour ferry to the town of Romblon on the island of Romblon to catch the ferry north to Luzon the next day.

Romblon is an island sitting on a huge slab of marble. Marble carvings, and uncarved slabs of marble are constantly shipped to other locations in the Philippines. There are old forts and churches in the area. I was tired when I arrived in the afternoon, so I took a nap in the fourth-floor window of a belltower of the centuries-old church. Unfortunately, my camera completely stopped working by the time I arrived in Romblon. It was getting worse and worse at holding a charge until it stopped all together. It's at the repair shop in Manila now. I randomly ran into another white face, a guy named Graham Keanz living in the town with his Filipina wife and two kids. He's someone who had tons of mental breakdowns in a family with a poor sense of what it means to have family, so he feels much happier in a place with such deep family values. He let me store my things in his kitchen so I could roam around town unburdened. Needing a place to cook dinner and wanting to thank him for watching my things, I cooked dinner for him and his family. A heart-warming spicy vegetable soup. There was more than enough left over for the long boat ride the next day. We pulled out our guitars and serenaded the streets of Romblon until late into the night. I stopped by the local gaming stop with cheap internet, and met my uncle Rolly online (a highly unlikely event for both of us). We got to know each other briefly and arranged for me to meet him in Manila when I arrived. I slept in the air-conditioned port and waited for the ferry the next day.
Posted by jazzlens at 3:20 PM